The week-long TED conference, Dream, was held in Vancouver this week. More than 70 brilliant speakers took the stage to dream, to “make no small plans”.

Here’s the first set of our favorite picks from the five-day event, curated by our young artificial intelligence, Iris.AI:

A decade ago Al Gore gave his famous talk at Stanford University that eloquently weaves the science of global warming. This week he addressed the same topic on TED stage by answering three questions – must we, can, will we – with the same persuasive and passionate rhetoric.

The answer to the first one goes without saying: yes, we do. He leads the audience through alarming climate statistics, with last year being the hottest on the record. Miami is flooding on a sunny day and women in some regions of South and Central America are advised not to get pregnant due to microbial epidemics that have become endemic due to our changed climate conditions.

But then comes the good news: Can we change, and will we change? Oh yes. Just look at the exponential adoption of solar and wind, and the Paris climate agreement.

This is the biggest new business opportunity in the history of the world”, Gore declares.

Iris.AI looked into the vast body of climate research including environmental, economic and social consequences of the changing climate and listed the open access papers she thinks are most crucial.

Go ahead, explore the science that she found at the.iris.ai/map/6704. 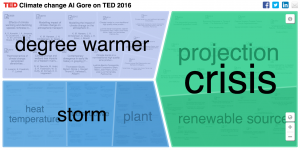 #2 Allan Adams: What the discovery of gravitational waves means

We can hear the universe speaking to us.

“1.3 billion years ago in a distant, distant galaxy, two black holes, locked into a spiral, falling inexorably towards each other and collided, converting 3 suns worth of stuff into pure energy in a 10th of a second…” Here’s how the brilliant talk by the MIT professor Allan Adams begins. In his talk, Adams leads the audience through the build-up of a crazy project that started 25 years ago with a goal to search for the gravitational waves from things like colliding black holes.

The giant laser detector built by the research team is an entirely new way to observe the universe.

It lets us hear the story that those waves are telling us by listening to changes in their amplitude and in their frequency. So, converting the wave patterns into sound, we can literally hear the universe speaking to us.

Zoom in and have a look at the rest with Iris.AI

Great dreams aren’t just visions. Couple them to concrete plans and incredible things can happen. Astro Teller, the head of X (formerly Google X), explains how his team, aka ”the moonshot factory”, allows for unchecked optimism to fuel visions, but then harnesses skepticism to breath reality into those visions. A typical day at X sounds like this: “Hey, are we going to kill our project today?” Teller leads the audience through X’s moonshot projects, not just success stories but also the ones that his team left behind on the cutting room floor.

Iris.AI got specifically excited about the projects highlighted by Teller. She pulled together research papers related to e.g. X’s wind turbine project aiming at getting access to faster winds by building higher turbines, and the Loon project that uses balloons to bring people across the world online – this latter one slightly confused our baby AI as she thought that Astro was talking about balloons in their traditional kid party context… 😉

Explore the science around the talk with Iris.AI

How exactly does Iris.ai work? Iris.ai’ top picks from TED2016

Receive regular updates on the company, science and AI

Sitemap
Credits
Scroll down
OUR COOKIE POLICYIn order to provide our services and give better more secure experience Iris.ai uses cookies. By continuing to browse the site you are agreeing to our use of cookies.